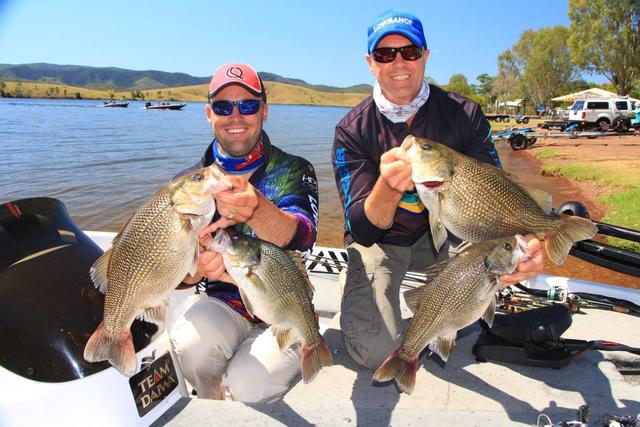 Dean Silvester and David Green from Team Quantum/Lowrance cleaned up at the Megabass BASS Megabucks.

Somerset Dam played host to the 2013 Megabass BASS Megabucks
event. Given the reputation of Somerset Dam the expectation was high that the
event would produce quality fish. Combine this with a no holds barred skins
format and large payouts and all the signs pointed to an exciting two days on
the water. Ultimately the weather and fishing did not disappoint and delivered
one of the 2013 BASS season highlights.


The skins format rewarded the three highest placed teams
each session as well as the session Big Bass. This format gave all teams an
equal chance each session to take home the great cash prizes on offer. Throw in
Megabass rods and reel prizes and you had the perfect recipe for a high
adrenaline, no-holds barred battle royal.

SESSION ONE 1st place Quantum/Lowrance (Dean Silvester and David Green)
During the event prefish Silvester noted that the fish
weren’t responding to traditional patterns. By applying erratic twitches and
shakes to his retrieve Silvester was able to get the bass to respond. Using
this knowledge team Quantam/Lowrance hit Pelican Point to begin their
tournament.


Finding no fish the team made a move to Bay 13. Using an
Ecogear Power Shad in eel colour rigged on a 1/2oz TT tournament series jighead
the team were able to quickly land four bass and fill their tournament limit.
Fishing in 35 feet of water the anglers deduced that the smaller fish were
holding tight to the bottom whilst the bigger fish were sitting suspended in
midwater, around 15 feet deep. By 9.30am this separation had become more
defined and the bass duly responded to the teams lures.


Silvester explains, “The size difference between the smaller
bass on the bottom and the larger suspended fish was huge. Using a retrieval
technique that incorporated an initial twich, steady retrieve and freespool pauses
we were able to secure the bigger bites”.


Fishing in 28-30 feet of water the team would employ a slow,
yet constant, retrieve to generate bites. When bites were forthcoming, but not
hooking, the lure would be stopped and dropped back to entice a strike.
“In all we caught 10-12 legal bass. The majority of our fish
came when the field moved away from the area and there was less pressure”,
explained Stead.


Short strikes saw the team add an additional trailer hook
which improved the hookup rate. Also of note was the tandem approach employed;
one team member would constantly slow roll a lure through the school whilst the
other would slow roll then drop the lure back to entice any following fish.
This latter technique accounted for the teams largest bass through the session.

Big Bass Fishing Monthly (Peter Leggett and Mike Connolly)
Mike Connolly of team Fishing Monthly caught the Big Bass
for session one. The bass came from Pelican Point in 35 feet of water. The
3.79kg bass fell to a Slider in baby bass colour rigged on an Impact Tackle
1/2oz headz jighead. The 61cm total length bass was a personal best for
Connolly.


SESSION TWO 1st place Quantum/Lowrance (Dean Silvester and David Green)   Session two saw team Quantum/Lowrance return to Bay 13.
Immediately they noted the increased number of boats fishing the area and
realised they would have adapt in order to land fish during the session.
Silvester explains their approach,


“It was a matter of finding patches of active fish. Once a
fish was caught the school would scatter and it was a matter of finding another
active patch of fish. Generally we would try and stay about 50-100 meters away
from other boats as the pressure made the fish less responsive. Occasionally
when the midwater bites died we would target fish on the bottom as this often
brought on the bigger bass again”.


Team Quantum/Lowrance again found fish in midwater, and were
able to secure their tournament limit. A move was made in the last two hours to
a ridge opposite Bay 13. The team changed presentations to a Squidgy Fish in
silver fox colour rigged on an Impact Tackle 1/2oz headz jighead.


“The goal was to secure bigger fish. The larger lure profile
and slightly larger jighead hook helped us to get the bass to respond and keep
them on”.


The team used the same retrieval technique used in the first
session and found the larger fish required to capture the session victory.
Their largest fish, 2.73kg, went on to take out the session Big Bass.

2nd place Gamakatsu (Steve Otto and Adrian Melchior)   Team Gamakatsu caught their bass at the eastern end of
Pelican Point, fishing the edge of the old creek bed. The team positioned
themselves in 30-40 feet of water before making long casts to the bass.


Melchior explains, “The fish were sitting in the 15-20 feet
deep section of the water column. We would cast and let the lure hit the bottom
before making a quick retrieve. The fish came straight on as soon as we
arrived. The bigger bass seemed to follow the lure until it was halfway back to
the boat then strike”.


The team found success with a 2 ½” Atomic big bass
paddletail rigged on a 1/2oz jighead. The lure was repeatedly scented with
garlic Megastrike.


“The bass were holding on the drop-off. They were scattered
as opposed to schooling up so we decided to drift over a large area of around
500 meters to maximise our chances of hooking up. The key lure was a 70mm
Squidgy fish in silver fox colour rigged on a 1/2oz jighead. The technique was
a slow roll punctuated with pauses where we would open the bail arm. It was
about keeping the lure as close to the bottom as possible. Most of the bites
came immediately after we began winding the lure in”, explaines Glyn
Barkhuizen.


Big Bass Quantum/Lowrance (Dean Silvester and David Green)   The session Big Bass (2.73kg) was caught late in the session
from a ridge opposite Bay 13. The bass was caught on a Squidgy fish in silver
fox colour rigged on a Impact Tackle 1/2oz headz jighead.

SESSION THREE 1st place Quantum/Lowrance (Dean Silvester and David Green)   In the final session team Quantum/Lowrance headed back to
Bay 13. They sounded big fish sitting midwater and attempted to catch them
using the techniques applied in sessions one and two. Finding the fish
unresponsive the team moved to Pelican Point and the ridge opposite Bay 13 with
little success. Eventually, with one fish in the livewell, the team settled on
Bay 13 as their location.


Sitting wide in 40 feet of water the team sounded up fish
and proceeded to target them using a combination of the Ecogear Power Shad in
eel colour rigged on a 1/2oz TT tournament series and the Squidgy Fish in
silver fox colour rigged on a PML/Impact Tackle 1/2oz jighead. As the session
wore on the suspended fish became more responsive and the team consistently increased
their limit throughout the session.


“The fish were under a lot of pressure with most of the
field in the general vicinity. It was a case of getting a bite followed by the
fish scattering, then having to find them again. This process was repeated
throughout the rest of the session”, explained Silvester.

2nd place Tonic/Evakool (Matthew Mott and Dylan Mott)    Team Tonic/Evakool
fished in Bay 13 to secure their tournament limit. The team positioned
themselves in 30-35 feet of water and cast towards a ridge in 25 feet of water.
Once on the bottom the lure was slow rolled back to the boat. This technique
allowed the team to fill their limit before they made a move out wider.


“The sounder was the key to staying in the right area. When
bass were directly below the boat we would mix it up with an ice jig to get the
fish biting. We used a Smak 12g priceless darter in silver colour”, explained
Matthew Mott.


Lennox explains, “Initially
we hit the sloping bank where we found bass. The technique was to cast up
shallow and work the lure down the slope. We would give the reel five slow
winds then let the lure fall naturally to the bottom. This was repeated all the
way down the slope”


“The suspended fish were larger than those on the sloping
bank so we positioned ourselves in water between 35-45 feet deep. The fish were
holding in 15-25 feet deep. We would cast out and countdown the lure for 12-15
seconds before slow rolling it back to the boat”.


The key lure for the team was a 65mm Squidgy fish in silver
fox colour rigged on a 1/2oz Gamakatsu flathead jighead. The lures tail was
coloured with chartreuse dye and a stinger hook was added to convert short
strikes.

Big Bass Tennessee (John Brider and Gavin Sticklen)
The session Big Bass went 3.6kg. Caught from a drop-off at
the end of the Spit the bass fell to a slow rolled Slider in baby bass colour
rigged on a Nitro 5/8th oz jighead. The bass was caught with only 10
minutes remaining in the session.


The Megabass BASS Megabucks brings to an end the 2013 ABT
BASS Pro season. A big thank you to all the sponsors who made the series
possible, and to the anglers who attended the events throughout the year. ABT
looks forward to seeing you on the tournament trail in 2014.