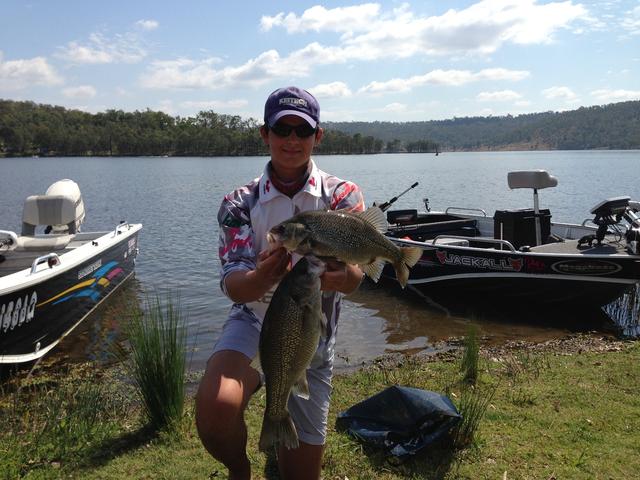 Father and son anglers Christian and Adrian Manolea took out 1st and 2nd
place in the Fathers Day Cressbrook Electric. Although it was fathers
day it was Adrian who came in first, relegating his father Christian to
2nd place. 15 anglers fronted for this Bass Electric comp but only 5
anglers weighed in bass. The bass that were weighed in however were very
impressive putting Cressbrook on the map as an aspiring big bass dam.

‘Barrabass Rods’ team member
Mike Henare and yak paddler Denis Shaw tied for 3rd place with 2/2 bass
weighing in at 2.0 kg even each.

Adrian
and Christian fished the flats in the Bull Creek arm, sitting in 30
feet of water casting Keitech 3inch easy shiner plastics rigged on 3/8oz
Impact Tackle jig heads. Their outfits of choice were Daiwa Steez rod
and reels loaded with 10lb braid and 8lb leader for Adrian and 6lb
leader for Christian.The father and son duo would cast out and slow
retrieve their lures with the bites coming about half way back to the
boat. Adrian caught 4 bass all up with one upgrade and Christian caught 3
bass. Adrian and Christian would like to thank sponsors Keitech and
Impact tackle.

3rd place Mike Henare fished the flats out in
front of the boat ramp to get his 2kg bag. Using his Barrabass XP841 and
XP902 rods Mike caught one of his fish with an ice jig and the other
casting out a blade, counting down 10 seconds and slow retrieve. Mikes
biggest bass went 1.3kg.

Denis Shaw fished a Rio Lake deep 7
line. His second option was to fish the point left of the boat ramp but
he could not find anything there so he fished further up the left arm.
Returning to that point with 1hr to go he noticed Mike Henare fishing a
bit wider so he moved 100 mts out & found them. The fish were
suspended at 20ft in a depth of 35ft. He extended his leader to 18ft
with 8lb and used a black marabou & mirror flash fly. Counting
down 15 seconds I used a short strip retrieve with a regular pause.

It
was also good to see Dave Bullard fit and well and back doing the comps
although I did point out to him that he appears to have mellowed a bit
in his absence.

Once again Tania and I would like to thank all
anglers for their patience and professionalism and as stated it is good
to see some quality fish coming out of Cressbrook. There is also some
weed starting to appear so as long as the dam remains reasonably stable
Cressbrook is going to produce some awesome bass in the future.

I
would also like to advise that this will be the last Bass Electric that
Tania and I will be organising. I am looking at getting an electric
boat myself and Tania and I are hoping to do some of the electrics next
year. (Yes I will be keeping the Skeeter as well for the Bass Pros)