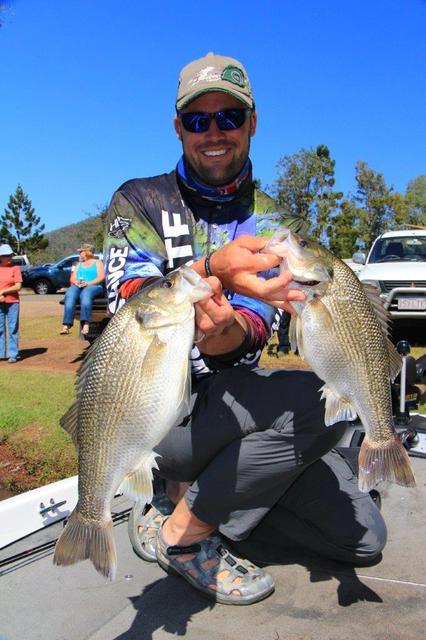 Continuing the hot form for AFC anglers in the event was
Callum Munro with the Sunshine
Coast basser weighing in
a new ABT Big Bass record in the final session to claim 2nd place
and secure the 2013 AOY crown.

For event winner Dean Silvester it was deep water affair for
the weekend with the Somerset BASS Pro champ fishing schooled and scattered
fish to fill his limit each session. Fishing Queen Street in session one it wasn’t
until two hours into the session that he caught his first fish.

“It took a while to get them and I was beginning to wonder
whether I’d made the correct decision. It all happened very quickly once we got
our first fish though. Ten minutes after that first fish and both my non-boater
and I had our limit. Another 30 minutes later and we’d upgraded all of those,”,
explained Silvester.

With the importance of managing his fish for the rest of the
tournament Silvester changed location and headed to the Cattle Yards. A lack of
wind and slow bite added little to his bag and he finished the session sitting
in 8th place.

Session two saw Silvester straight back to Queen Street but
just like in session one he had to wait patiently for the fish to turn.

“Just like in the morning it took a while, but once they
started to bite both my nnon-boater and I filled out bag in quick time
explained”, explained Silvester.

“The abundance of fish on your sounder and in area varied
all the time so you just needed to stay focused and make sure you keep your
100% all the time”, explained Silvester.

With their limits filled Silvester and his non-boater once
again left the area, choosing to rest the area for the next session rather than
completely burn their fish in the hope of few upgrades. Weighing in a 4.55kg
limit for the session Silvester now held the lead heading into the 3rd and final session.

Heading straight back to Queen Street on Sunday morning
Silvester focus was now not to manage his fish but to catch as many as he
could, and the biggest fish that he could.

“I start fishing away from the pack in the hope of finding
less pressured fish. While my non-boater caught fish straight off on ice jigs
is wasn’t until about 8.30am that I start to get fish”, explained Silvester.

With his limit quickly filled Silvester then spent the next 1
½ hours catching plenty of fish, just none of the XOS fish that he was hoping
for.

“I had to solid 45s in my bag but I was worried what Callum
had and if he had enough to run me down”, explained Silvester.

With a solid 4.14kg limit hitting the scales Silvester in
the end had enough to hold off a strong finishing Munro.

The victory for Silvester was his BASS Pro win. A win that
now accompanies a BARRA Tour round win and a QLD BREAM Open title.

For event runner-up Callum Munro it was a loss that was
filled with much celebration and success. In addition to claiming the Big Bass
Prize at the event, he also set a new all-time ABT Big Bass record (3.82kg) and
claimed the 2013 BASS Pro Angler of the Year Title.

Hitting the edges in session one caught his limit but was
less them encouraged with what he found.

“I managed to catch a limit but I was less than confident
that the edges would provide the numbers and the quality of fish that was need
for the rest of the tournament”, explained Munro.

Looking deep in session two Munro headed north to the
Kirkleigh area and searched locations that had produced for him in the past. He
didn’t have to search for long with AOY champ quickly finding fish and catching
them on the lure that had served him well there in the past, a 12gram Smak Ice
Jig. The result of his session two move was twenty fish for the session and 3rd place heading into the final session.

Heading off into the fog on Sunday morning Munro headed
straight back to his session two spot, a location that he would have all to
himself for the final session and a location that would produce a load of fish.

“It took about 20 minutes to get them to bite then it was a
fish about every 20 minutes for the next 1 ½ hours”, explained Munro.

A 29-33 feet deep flat it was a location to the untrained
eye seem to have very few fish on it.

“The fish were sitting real hard to the bottom, they were
basically flat lining on the Humminbird sounder”, explained Munro.

His technique with his ice jig involved giving the lure a
couple of short rips then letting it sink back down to the bottom. If a fish
was to eat the lure it was when it when to rip the lure again that there would
be a fish on.

“They were definitely eating it on the drop, enhaling it as the
lure sank back down”, explained Munro.

The standout fish in his bag was his forth fish for the day,
a 60cm fork length bass that would claim the Big Bass prize for the event and
also set a new record for the heaviest bass ever caught in an ABT event.

“I didn’t feel very big when it first took the lure. It
wasn’t until it came up next to the boat that I had any idea that it was that
big”, explained Munro.

A once in a lifetime fish it was fitting that it was the
fish that secured him a podium finish and ultimately deliver him his maiden AOY
crown.

Bryant Bags His Way
to Victory

For champion non-boater Ashley Bryant it was definitely a
case of lightning striking twice, with the Gold Coast angler adding his
Somerset non-boater BASS Pro win to his Gold Coast non-boater BREAM win from
the week before.

Fishing with Jason Ehrlich on day one and Tim Morgan on day
two Bryant fished a deep water flats pattern both days to catch his fish. Day
one with Jason involved fishing small blades and working them with a series of
small hops and pauses.

“I varied the retrieve throughout the day but it was
primarily small hops and drops that did the damage”, explained Bryant.

Weighing in 5.15kg in session one and 1.69kg in session two
Bryant sat in 2nd place heading into the final session and only
needed another hot morning bite to finish on the podium.

Day two saw Bryant return to the area between Pelican Point
and Red Rock that had been so productive on day one. A 32 feet flat it was a
hoped and dropped Strike Pro Cyber Vibe that he once again used to catch his
fish. Catching four fish for the session and weighing in a 2.08kg limit it was
enough to hold off a strong finishing Shaun Falkenhagen and claimed his maiden
BASS Pro win.

Turning his years of wild river bass experience into
impoundment tournament success Bryant has now qualified for the Grand Final and
is a chance to continue his hot run of tournament form into Grand Final
success.

Despite the fact that anglers around him were catching
plenty of fish on ice jigs Silvester stuck steadfastly to his soft plastics,
confident that they would produce better quality fish.