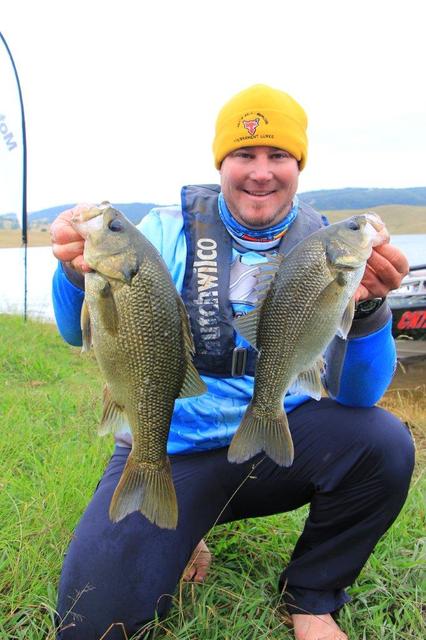 Compiling a 5/6, 5.445kg limit to claim the win, Shepherdson
held off a strong finishing Matthew Mott to book a berth in the September Grand
Final and claim his maiden BASS Pro win.

Fishing close to the event start line Shepherdson went
against the majority of the field who were throwing a bettle spin to catch
their fish and instead fished a combination of silent and rattle Jackall TN60
lipless crankbaits in brown dog colour.

“The little creek that I fished had a good concentration of
fish in it and the Jackall seemed to get the best response from them and drew
the bigger fish to bite”, explained Shepherdson.

And the bigger fish definitely did bite for Shepherdson with
the St Clair champ catching two of the only three 2 kilo plus bags weighed in
for the tournament.

With his boat positioned in about 10-15 feet of water his
technique involved casting his lure to the weed edge, letting it sink for 2-3
seconds, giving it a couple of cranks, then letting it pause for another 4-5
seconds. This was then followed by a slow roll back to the boat. Most of the
hits came just as he started the slow roll.

The technique produced six fish in the first session, nine
in the second session and a lone single fish in the third session.

“The prefish and day one were the best. On the final day
when we had clear skies and bright light it got a lot tougher”, explained
Shepherdson.

Shepherdson wasn’t alone when it came to finding things
tougher in the final session. Only two anglers in the top five heading into the
final session caught their limit, and one didn’t weigh a fish at all.

This played into Shepherdson favour with his 780gram leading
proving enough to deliver him the event win.

With a spot booking into the Cania GF Shep is looking
forward to heading to the scene of the 2001 Grand Final.

“I fish Cania a few times a year and come September the
place should be starting to fire. It’ll make be for a great final and I can’t
wait to get there”, explained Shepherdson.

Winning Ways Found the best spots in his creek to be the small weed
cut-backs, points, and clay areas.

Three times BASS Pro Grand Final winner Matthew Mott was a
travelling angler at St Clair fishing multiple locations and arms to catch his
podium placing fish. Fishing near the dam wall first up in session one Mott
filled his limit fishing the surface before changing location and technique in
search of upgrades.

“I picked up two early on a black Lucky Craft Gunfish 75 then moved around the
dam throwing a combination of Evergreen Little Max blades rigged on a Beetle
Spin, and a new prototype 1/4 oz Smak Lures spinnerbaits”, explained Mott.

While many anglers fished tight to the edges to catch their
fish Mott fished wider, an approach he was confident would pay off later in the
tournament.

“The fish close to the edge produce early but they get hit
hard so they tend to shut down towards the end of the tournament, especially
the traditionally difficult final session”, explained Mott.

With this is mind Mott would position his boat in 12-20 feet
of water and work parallel along each bank that he fished.

The approach paid off with Mott one of the only two anglers
in the top five to catch their limit in the final session. Its effectiveness
can also be seen in his catch card with Mott catching 10-12 fish in session
one, another dozen in session two, and the same number again in the third
session.

While his choice of location and technique played an
important role in Mott’s consistency and ultimately his result, by his own
admission his choice of tackle played a vital role also.

“It was important to be able to make long casts and cover
plenty of water. The 6’4” Dobyns spin rod that I was using allow me to cast the
lure long, more so than other 7’ rods that I had in the boat”, explained Mott.

With a spot booked in the Grand Final Mott’s focus is to
fish well in the two remaining qualifying rounds and hopefully gather some good
points for his charge at the AOY title.

“We’re back in Queensland
for the last two events (Boondooma & Somerset). I’ve done well on both of
these lakes in the past so I’m looking forward to hopefully getting some solid
results and if all goes well featuring strongly in the AOY”, explained Mott.

“I prefished with Dan Clancy on Friday and found a slow
rolled Beetle spin rigged with a soft plastic to be the most consistent and
reliable way to catch fish”, explained Reid.

Fishing the upper reaches of the Fallbrook arm on day one
Reid fished to the edge, and with the boat in 18 feet of water he’d cast his
Bassman Beetle Spin to the weed line, work it down the face then slow roll it
along the contour of the bottom with a dead slow retrieve.

The approach was spot on with Reid catching his limit each
session. His session two limit was in fact the 4th heaviest of the
field for the session.

Heading into day two with a near half kilo lead Reid’s focus
was to try and scrape together two fish and hope that none of challengers found
the big fish that St Clair is known to produce.

Fishing the edges Reid was once again throwing his Beetle
Spin, albeit this time a little closer to the edge.

“We weren’t getting much close so when ever I got the chance
I’d fish a little wider and it was here that I picked up fish”, explained Reid.

Catching two fish for the session Reid in the end secured an
easy win, extending his half kilo lead heading into the final day into a
1.405kg winning margin.