For the readers who have kept up with my blogs, you would know that one of my main concerns with what I’m trying to achieve was being granted a Visa to enable me to stay through the season and just worry about my fishing and not the million other things that would run through my head each day!
Finally after a year of gathering paper work, phone calls to attorneys and trying to find a US Sponsor to back me (oh yeah and $6 grand!), it all fell into place!
With one week left before I had to fly home as my time was up, I got the phone call to tell me my 3-year Sporting Visa was approved!
It was then the work really started.

I had to fill out more paper work, get it sent back and get the approval forms back to me before flying home where I had to book an interview at the American Embassy in Sydney within the 10 days that I was home and be back in time for the Table Rock Open in Missouri. 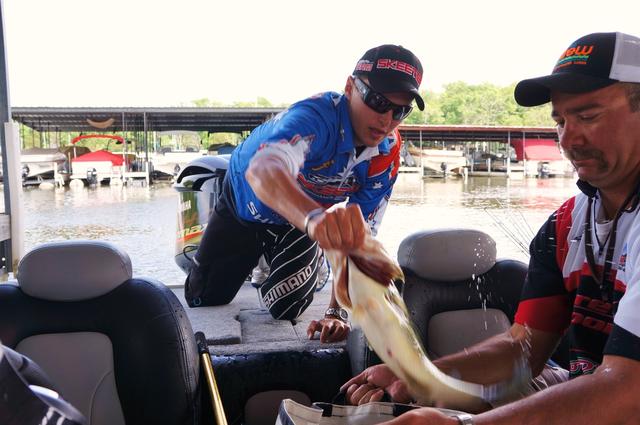 Things somehow all lined up and I got the paper work the day before I flew out. I got the last interview possible while I was home two days after I landed! I have some great mates in Australia and good mate Ash helped me make the long drive down to Sydney for the formal interview and I also got the chance to stop in and see some of my sponsors! Bassman Spinnerbaits, Millerods and Shimano were all on the list as I had plenty to communicate to them. It was the first chance I had to really give my insights into what I had learned. This allowed us to make adjustments to products to make these products ideal for what I’m doing. It was invaluable.
I am also super happy and proud to say that Millerods has gotten right behind me and supported me with not only what I believe to be the best made fishing rods in the world, but Millerods has given me financial support to make sure I see this season through! Once again I am just super grateful for the support from my sponsors and the Australian fishing community! It’s huge motivation and has taken a huge weight off my shoulders. 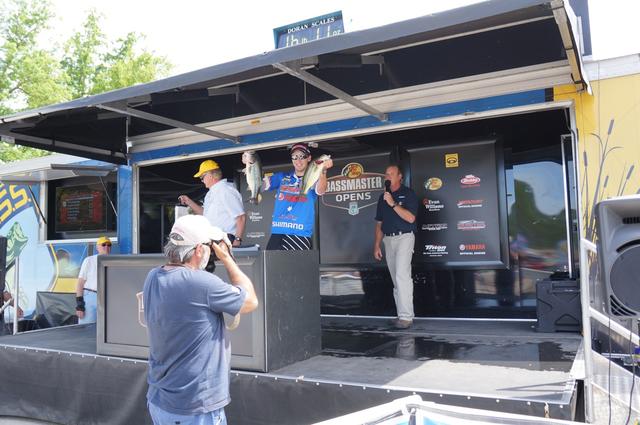 With the long drive home I was glad Ash was in the driver’s seat because I was done. I got only a few days at home to see family and friends and catch up with the people that mean everything to me! In a blink I was heading back down to Brisbane for the long flight back to make it in time for the second Central Open at Lake Table Rock.
This time though was a little different as I was joined by my sister (Sarah) her partner (Andy) and my great mate and cousin Kris. Kris was entered to fish as a Co-Angler in the Table Rock event; his first ever US Bass Tournament and this also meant he could pre-fish with me leading up to the event and split the costs. Both were a huge help.
I had spent a lot of time the month before on Table Rock, plus the 5 days we had out there added to the experience and I went into this competition super confident.
I had a little added pressure with my sister being there to watch and I was hoping to do well for all of my Aussie friends who were there.

Once again I was suffering from jet lag, which has hurt me in previous tournaments and Kris got to really see what it’s like as I don’t think he believed me when I said it was hell.
We struggled to get to sleep by 11pm and by 2am we would be wide awake, lying there till 4am before going to get the boat fully sorted for the wait at the ramp till daylight. We’d then fish till dark and do the same thing over for the next 5 days and then into the tournament. But even with the lack of sleep taking its toll on both of us, the first day couldn’t have gone better. I caught my 5th keeper with 15 minutes to go, which was an awesome feeling! I knew it was going to be tough as I wasn’t getting allot of bites, but when I did they were the right ones! Coming into the weigh in and seeing my sister there to watch was a proud and emotional moment! Then on stage the fish hit the scales and I’m sitting in 2nd position. A rush I can’t describe and you could certainly hear the Aussie support crew which made it even better!  After the 170 boat field was done I was sitting in 7th ready for the next day.
Blasting off the next morning I was in a mind frame I’d never been in before when fishing the US. Usually I would be thinking I hope the fish haven’t changed on me and I hope I catch them. This time there was no doubt I was going to get them. Even if they did change on me I was going to find them. Change they did, just like they have so many other times and at midday I had no fish in the live well.
But this time I made some good decisions and scrapped what I knew and just went fishing! By 1pm I had my 5 Bass – 3 nice ones and 2 small ones. I was stoked! I knew I needed to get rid of the 2 small ones if I was going to have a shot at making the day 3, 12 angler cut and I swung for the fence to try get those 2 big bites I needed but it wasn’t to be.
I was still extremely happy. I made the adjustments when the fish changed to keep me up there. A 19th place was the end result and after two Central Opens and two top twenty finishes it has me sitting in 8th overall for the Angler of the Year with one round to go.
Kris had a rough two days with his boaters not being anywhere near anything that we were on but on the second day he did well considering the conditions and he caught his 3 bass limit only for his Pro to have engine troubles and not make it back to the weigh in! He still had a blast and has plenty of new techniques to bring back into his shop and try back home.
As far as making the Elites for next year I will need at least a top 20 finish at Fort Gibson. There are 4 Elite Pros just ahead of me so I’m really sitting in 5th and that’s where I need to stay.
The last 2 weeks have been great Kris, Sar, Andy and I did a road trip that was hard to beat and they got to see some of the country and do things that are hard to do without having contacts and knowing people over here and we had some of the best American hospitality you could find. It was hard to see them go and be without any Aussie company here again, but it was back to work for me with plenty to do.
This week I have been organizing my Social Security number, US Drivers Licence, a U.S Bank account, change my insurance on the truck and boat (it will be cheaper now) and the list goes on. But I hope to be back fishing by the end of the week.
I’ll also be doing regular updates of video with new techniques and products I have discovered over here and what and where I’ll be fishing at next. www.fishingmonthly.com.au and www.australianbass.com.au will be uploading it so keep your eye out! The first short video should be up in about a week’s time and features the lure of the moment, the Alabama Rig.
Until then fish hard!
Carl Jocumsen
This blog entry is dedicated to the late Bill Simms (Bilbry) one of the most passionate fisherman I knew, you will be greatly missed.